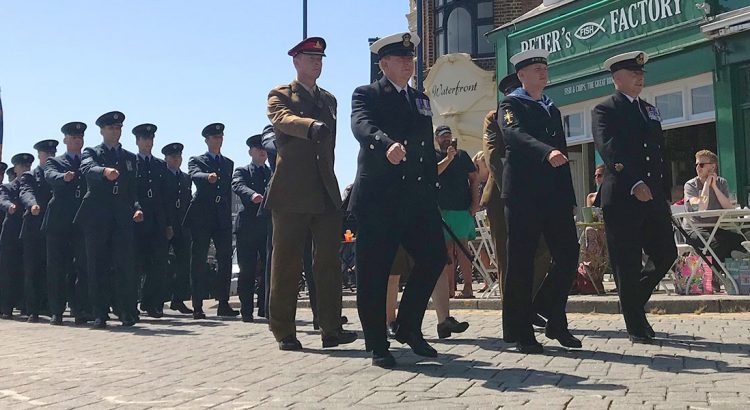 On Saturday I attended the Armed Forces Day service which was held near the seafront in Ramsgate. Along with the other Town, District and Westminster officials, and hundreds of locals and tourists, I watched current and ex-service personnel and young cadets parade from the Sailors’ Church to the obelisk near the Royal Victoria Pavillion.

I always have very mixed feeling about Armed Forces Day. On the one hand I understand the intrinsic value, security, and dedication that our service personnel give our nation. On the other hand I wish there was no need for this. For instance, I wouldn’t want to continue with the Trident programme, but scrapping Trident would be contingent on fully ensuring all employees associated with Trident were properly looked after and moved into ‘transition’ industries. Otherwise it would be like closing the pits! Some of those mining communities still struggle.

I was very proud of the cadets on parade. I saw some very caring behaviour (it was so hot), they all conducted themselves so well. Back in the day my own sons were both cadets, Daniel an air cadet and Aaron an army cadet. It gave them structure, pride, targets to aim for, and group work and leadership skills.

Showing support for the Armed Forces provides a much valued morale boost for the troops and their families. You can find out more about what they are doing at home and around the world by visiting the official sites of the Royal Navy, British Army and Royal Air Force.

Should we pay our armed forces more?

“Labour wants to see proper investment in defence and a decent pay rise for our men and women who have had to endure seven years of real terms pay cuts since 2010, despite rising rents in service accommodation and cuts to tax credits.”
Nia Griffiths, Member of Parliament for Llanelli