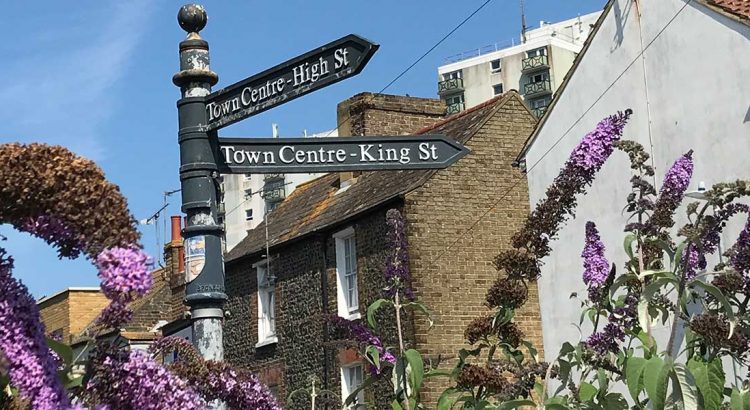 I hope everyone has had the opportunity to enjoy some of the fantastic weather we have had in Ramsgate. I’ve been pleased to share some of the summer break with my grandchildren, who are growing up fast. It’s such a joy to be able to use Ramsgate Main Sands. There are also many fabulous local businesses which provide summer gloss, whether it be ice cream or a bucket and spade or a rented kayak and a much needed bag of chips. We’ve done them all and more.

Wetherspoon’s, Royal Victoria Pavillion has proved itself to be a ‘hit’ in its first full summer of operation, but come on, Tim Martin get your disabled toilet sorted out. The ground floor facility is great but I’m told the one on the upper level leaves so much to be desired.

Meanwhile, further along the seafront the fair has sprung up on Ramsgate’s Pleasurama wasteland. I welcome this with caution. We have been crying out for something productive to happen ahead of any proper development. In the absence of a working building site a merry-go-round seems apt.

Surrounding the Pleasurama site are the hoardings, often referred to as ‘The Great Wall of Ramsgate’. I was delighted to appear as one of the ‘Portraits of Ramsgate’ amongst the ten additional panels which were created as a project between students from the Royal Harbour Academy and Chatham & Clarendon Grammar and Project Motorhouse under the guidance of Jo Mapp.

Aside larking about on the seafront, I started the summer being shadowed by a local student, Jay from Newington. Jay came to many meetings with me and has been helping to report potholes in my District Council ward. Pot holes are a hazard to all road users including cars and cyclists and, if left unchecked, can deteriorate leading to increasingly costly repairs as well as increased danger. Kent County Council aims to fix reported potholes within 28 days or 2 hours if deemed an emergency but can only do so if they know about them. To report a pothole, visit www.kent.gov.uk/roads-and-travel. Cycling UK has launched a website dedicated to help cyclists receive advice on pothole reporting and claiming. This can be found by visiting www.fillthathole.org.uk.

Steve Albon, Theresa Smith and a few others have also been helping to run the Summer Kitchen. This community project has been providing highly nutritious food at St Christopher’s Church Hall in Newington three times per week. Plans are afoot to continue this beyond the summer months. I have huge admiration for the project founder, Sharon Goodyer who dreamt up the idea and, against the odds, saw it to fruition. The BBC covered her efforts in a South East news report during early August. Additionally, my thanks go to fellow Cllr Barry Lewis (we co-funded this project) and Thanet Earth and all the other donors.

There has been a great deal of concern about cuts to the bus services. I contacted the KCC member Cllr Mike Whiting, Cabinet member for Planning, Highways, Transport and Waste, several times to seek a meeting for Ramsgate residents. I’m afraid Mike let me down! We need to halt any closures to bus services. We need better services, cheaper, more reliable transport, especially train services.

The High Speed link that Labour’s Steven Ladyman, MP lobbied for is vital to Thanet’s economic success. The proposed Thanet Parkway station will add 2 minutes to Canterbury and London bound journey times. Signalling upgrades to the line will save 3 minutes, giving us an overall journey cut of a single minute. I believe the £millions earmarked for Thanet Parkway station in a field near Cliffsend would be better used elsewhere in Ramsgate.

It would be remiss of me not to mention the Port. It seems highly unlikely that we will ever return to successful ferry services. Even if we did attract ferry companies, it’s a volatile and competitive market place. I support a full review of Ramsgate Port. However I do not want to see it privatised. I want to see what can be achieved for the good of Ramsgate and Thanet overall. Steve Coombes of Ramsgate Action Group organised a meeting, which I attended, to discuss mismanagement and losses at The Port. He is now petitioning Thanet District Council to create an independent working party to investigate these issues. You can sign the petition here.

The plight of NHS wheelchair users made headlines earlier in July. As a member of the Health Overview and Scrutiny Committee (HOSC) on Kent County Council, I spoke out strongly against the evident failure of private company, Millbrook Healthcare who were contracted in Kent to deliver wheelchair provision to long and short term users. Wheelchair users are extremely angry about the poor service provided by Millbrook. I have to say it simply isn’t acceptable for so many people to have to wait to be measured properly, or to have repairs. I am in regular touch with a variety of people and wheelchair user groups. We must get this right.

Three NHS CCGs (Clinical Commissioning Groups), including Thanet have been placed into special measures. This is obviously not good news. The review of the Kent and Medway Stroke until is ongoing. The decision will be taken in January 2019. I have asked for the following:

I have written the CEO of SECAmb (South East Coast Ambulance Service) Daren Mocrie this is being treated as a freedom of information request. I will of course share the findings widely. Here is my letter of 21st August 2018:

I’m writing on behalf of a number of people who have contacted me with pressing concerns. These are serious matters to which I expect an urgent response. These are matters that are within the ‘public interest’.

I look forward to your early response,

A number of us, Jenny Matterface, Sharon Goodyer, Jane Hetherington, Dick Symonds, Cllr Barry Lewis and myself have written to Craig Mackinlay urging him to raise the issue of the crisis in children’s and adolescents mental health in Parliament. I’m waiting a response

We hope you have had a good summer break?

Locally community activists have been running an excellent ‘summer kitchen’ project which has helped to ensure many local people, and children in particular, have had frequent, nutritious meals through out the school holidays.

It’s been great fun to do too! Both of the kitchens have served South and North Thanet residents and were held at Draper’s Mill, and St Christopher’s Church, Newington, which is of course, in your constituency.

Whilst we all seek to do what we can to promote the health and wellbeing of all Thanet’s residents. As the new term approaches we the undersigned are extremely concerned about yet more research that indicates a deepening crisis in mental health care for our young people. We are concerned about the lack of services for adolescents in Thanet.

As you will also be aware, earlier in March figures showed the shocking reality of mental health care provision across Kent. Up to 800 hundred vulnerable children aged 8 – 11 years old are waiting for up to two years for an assessment for autistic spectrum conditions and attention deficit / hyperactivity disorder.

That is a 2 year wait just for the assessment! Not for any treatment.

The figures, released in March this year by Kent & Medway Clinical Commissioning Groups (CCG) clearly show that too little money was identified for the contract, meaning that much needed assessments and treatments are having to wait.

Another sobering report by the Guardian in the last few days released figures which also show how many children are being sent to in-patient beds far from home.

We know adolescents in Thanet have been impacted by this.  We wonder if you could raise these matters in Parliament? We clearly have a crisis in mental health amongst our young people and this is evident in South Thanet. Only this week the Children’s Society released a report outlining shocking and rising levels of self harm.

“More than a fifth of 14-year-old girls in the UK said they had self-harmed.

11,000 children found 22% of the girls and 9% of the boys said they had hurt themselves on purpose in the year prior.”

We urgently need more ring-fenced money and importantly more professional staff for the provision of mental health services to our children.

We await your response,

Continuing to do all I can

It seems to me that Ramsgate is caught in the middle of a storm with unresolved issues such as the Port and the future of Manston. It is clear that our Health Service and Social Care are not up to scratch and, despite the best efforts of staff, both they and the resources are being stretched too thinly. We are failing to house our homeless. We are failing to adequately look after vulnerable children. As your County and District Councillor, I will continue to do all I can politically and as part of our vibrant and strong community. I am hopeful that we can really start to resolve these issues soon.