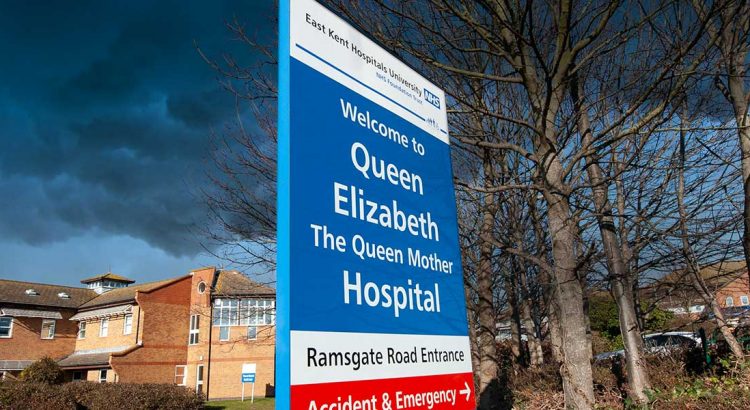 The early closure of a hospital stroke unit in Kent has sent alarm signals to residents in Thanet. Stroke patients in Tunbridge Wells will be treated over half an hour away in Maidstone from September.

The announcement comes as NHS managers struggle with staff retention and recruitment. Continued provision of stroke unit services in some Kent hospitals has become an increasingly difficult task as medical professionals look for more secure employment, sometimes quitting the NHS.

Many of us are desperately worried about our NHS, particularly the stroke service at QEQM, where staff do a frankly magnificent job.

However, the proposal to close stroke services at QEQM and move them to Ashford is the wrong decision. The same plan has been forced through in Tunbridge Wells, with their stroke ward, ward 22 being moved 36 minutes away to Maidstone.

The service in Tunbridge Wells has collapsed just five months after the decision was made by the Joint Clinical Commissioning Group (CCG). Thanet has to sustain staffing for another 18 months. After that time our staff will be required to travel more than an hour, each way to the William Harvey Hospital in Ashford to perform their specialist duties.

Judicial review ready to be heard

Remember Thanet residents have one fully funded Judicial Review lodged and ready to be heard. Our client, Marion Keppel is ready to go to court and we are simple waiting for a date to go forward. Thank you, again,  to all those that funded this action back in May.

Here’s my fresh letter to the Stroke Service managers and the full story from the Health Service Journal (HSJ).

I hope you are both well?
I’m contacting you about the story in HSJ today and on next week’s HOSC agenda. I have copied the news article in full below.

I was waiting to raise this matter formally at next week’s HOSC as its on the agenda, but I think I need to ask some questions about staffing levels at QEQM urgently. Can you please send me the relevant staffing metrics for QEQM? I believe we need to have a ‘deep dive’ to understand what’s happening in Thanet.

Also, this critical issue of staffing was raised repeatedly during the many discussions about the citing of ASU/HASUs. It appears that some of our staffing fears are being legitimatised.

It appears that at Tunbridge Wells Hospital staffing levels have dropped, as staff have ‘voted with their feet’ and found other jobs? Rather than face the prospect of being relocated to Maidstone. However now that ward 22, the Stroke ward at TWH is being closed due to unsafe staffing levels, staff remaining have to be relocated to Maidstone. Precisely the circumstances that they were seeking to avoid.

It’s a 36 minute drive from Tunbridge to Maidstone. It’s 62 minutes from QEQM to Ashford. I doubt staff at QEQM’s stroke unit will want to transfer to Ashford. Will we face the same issues here in Thanet?

This situation has a significant bearing on Thanet. Especially as the HASU at William Harvey Hospital will take a longer period of time to set up, and that the population of Thanet are put to a greater disadvantage due to geographical location and the proposal to site a HASU for Thanet in Ashford is a greater distance away.

* Unit will close by September 2019 rather than in March 2020
* Service due to close as part of planned reconfiguration of stroke services in Kent
* Nursing vacancies have risen, with three-quarters of registered nurse posts on ward now empty

A Kent stroke unit is to close seven months earlier than planned, as the loss of staff is putting patient safety at risk.

The unit at the Tunbridge Wells Hospital is now expected to close by September. Patients sent in via an ambulance overnight are already diverted to Maidstone Hospital.

The service is one of three in Kent and Medway which are scheduled for closure, while combined hyperacute and acute stroke units are created at other sites.

The first stages of the reconfiguration were expected to be the closure of the Tunbridge Wells service and another service at Medway Foundation Trust, and the establishment of HASUs at Darent Valley Hospital, in Dartford, and Maidstone Hospital in March 2020.

But vacancies in the Tunbridge Wells unit have increased over the last few months, with more than half the thrombolysis nurse posts vacant along with three-quarters of registered nurse posts on its stroke ward.

In a report to Kent County Council’s health overview and scrutiny committee, Sean Briggs, chief operating officer of the trust, warned the thrombolysis service at Tunbridge Wells can only be staffed 9-5 Monday to Friday and on some weekends from August.

The report noted the vacancies existed “despite robust and frequent recruitment activity”, adding: “Uncertainty around the implementation of the HASUs and ASUs has added to our recruitment challenges at Tunbridge Wells, and some staff have, understandably, sought more certainty in other roles both within and outside of the trust.”

The report to the HOSC added: “Local resolutions have been exhausted and are now not able to deliver what is required to sustain [the stroke ward]… whilst maintaining quality and managing risks.

“The indications are that the service will progressively deteriorate to a point where urgent and potentially knee jerk intervention is required.”

The trust now plans to move all stroke care to the Maidstone site by September.

Plans to reconfigure stroke services in Kent and Medway were backed by a joint committee of clinical commissioning groups in February this year. However, Medway Council has referred the plans to the health and social care secretary and a number of judicial reviews are underway or planned.

Under the reconfiguration, HASUs would be set up at Maidstone Hospital, Darent Valley Hospital and the William Harvey Hospital in Ashford – all of which already have stroke units.

Existing stroke services at Tunbridge Wells Hospital, Medway Hospital and Queen Elizabeth, the Queen Mother Hospital in Margate, would close – the latter in 2021. According to initial documents on the reconfiguration, there would also be some impact on services run by East Sussex Healthcare Trust, as some patients who currently go to Tunbridge Wells might in future go to the stroke unit at Eastbourne District General Hospital.

Maidstone and Tunbridge Wells Trust said the planned “temporary and urgent” move could be reversed if a different configuration of services eventually goes ahead.

A spokesperson for East Kent Hospitals, which runs the stroke services at both William Harvey and the QEQM, said: “The safety of our patients is our first priority and we continue to regularly review the sustainability of stroke services in east Kent.”

Dear Karen,
Thank you for your email.

For absolute clarity this is a response to a patient safety issue within MTW and not early implementation of the stroke review. The Trust have confirmed they will comply with the final outcome of the review, whatever that may be, and no change is irreversible.

As you say Maidstone and Tunbridge Wells NHS Trust with West Kent CCG are attending the Kent HOSC next week and I am sure all of your specific questions will be answered at that meeting. I will certainly make sure they are aware of your questions in advance.

We have always been clear that maintaining staffing levels during a period of change was a risk and that once the new HASU sites were agreed by the Joint Committee of CCGs this risk would likely increase.  We have also been clear about the additional level of risk that challenges to the recommended option and resulting delays to implementation could bring. This is clearly demonstrated in the risk register for the programme. All of our organisations have been, and will continue to, work incredibly hard to ensure stability of the current stroke services in the interim ahead of being able to move to a confirmed option when the outcome of the challenges is known.

You will be aware that Tunbridge Wells is surrounded by other stroke services in Eastbourne, Brighton, Surrey and London that are already HASU’s which is not the case in other parts of Kent. I would also like to reassure you that staff currently based at Tunbridge Wells who do not wish to move to Maidstone will be offered suitable alternative employment at Tunbridge Wells. No staff will be forced to move sites.

All of the current stroke services are fragile, as demonstrated in the DMBC, and that remains the case. I have spoken to EKHUFT and they confirm they are monitoring  staffing levels carefully and are in regular dialogue with the staff as part of mitigating any further deterioration. Anne Neal is leading this work.

I will be able to ask a full range of questions about the stroke unit at the Health Overview and Scrutiny Committee (HOSC) next week. Where this particular issue is on the agenda. However I note the response that people from Tunbridge Wells will be able to travel too a choice of stroke services, like Eastbourne Brighton, Surrey & London. Thanet doesn’t have other stroke services it can use nearby.

I would also question what suitable alternative employment is there for a fully qualified experienced thrombosis nurse? None. What a waste of talent and skill.

In addition the following questions remain with regard to the closure of Ward 22, the stroke unit at Tunbridge Wells Hospital: