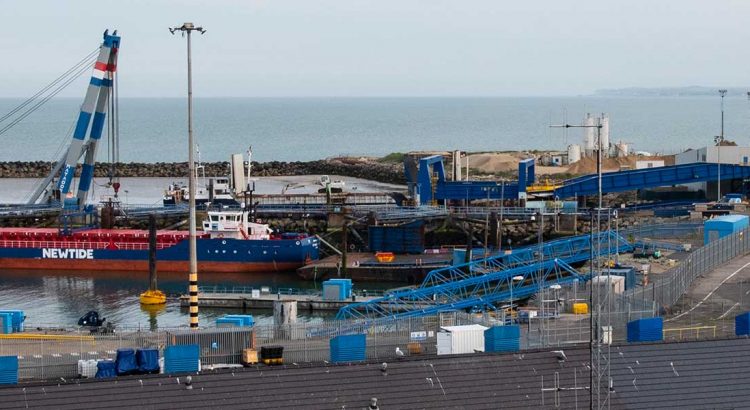 I’m really pleased that we have such great progress at our port.

As has been reported in the press, the replacement of the berth used by Brett Aggregates has been put on hold until an Environmental Impact Assessment (EIA) has been carried out.

I have been concerned about Ramsgate Port and the potential to damage to our environment since I was first elected to KCC in 2017. It took me several years to establish that there was no EIA. In June, after a lengthy email exchange I challenged KCC and requested “that KCC provide the EIA urgently or can I draw the conclusion that it doesn’t exist?”

The silence was deafening. It was clear that the EIA didn’t exist. Once this was established we were able to run a coach and horses through any potential development.

Nothing should be allowed to damage our environment and marine ecology. KCC deliberately dragged their feet, they must stop ‘playing politics’ and should provide properly requested information to all Councillors in a timely fashion regardless of what party they represent.

In October 2016, I published a leaflet which stated:

An Environmental Impact Assessment is vital to ensure we can conserve this globally significant site, which may still feature further undiscovered species, and certainly contains the best of British wildlife, landscapes and plant life.

We are so lucky that Margate, Broadstairs and Ramsgate encompass some of the most stunning and scientifically significant coastline in the world. We have 15 stunning sandy beaches stretch from Pegwell Bay to Minnis Bay, featuring soaring chalk cliffs; this stretch of unique coast is 12% of Europe’s coastal chalk.

The Pegwell Bay SSSI designation ends just before Ramsgate’s direct coastline begins, which puts many of the species in this area in particular at risk. However, many of the species and features that give the Thanet coast SSSI status (such as chalk cliff-top grassland, sanderling and plover populations, rare algae on cliffs and mud/sand flats) feature prominently on the Ramsgate-adjacent coast.

The protection of these species and areas are internationally important for conservation. Species of algae have been discovered in Thanet sea caves that are so rare, they have never been seen outside of Thanet. By allowing development in these delicate ecosystems, we may be destroying species that have previously been undiscovered.

I wrote to Kent county council in October 2016 to register that I was against the development of the port unless it had a proper environmental impact assessment.

I opposed the Brett’s extension. When they applied to Kent County Council (KCC) for a Certificate of Lawfulness of Proposed Use or Development (CLOPUD)  for the erection of a sand and gravel washing plant in the Port of Ramsgate. As a local resident and councillor, I was extremely concerned about the detrimental impact the proposal could have on the nearby habitats, including Pegwell Bay SSSI

So what do we want for Ramsgate Port?

Any discussion about the future of Ramsgate Port should include all of the local residents. We need to insist on a thorough and robust consultation that allows everybody to participate in a genuine way. We have an amazing asset. We need to make the most of that asset and the Royal Harbour. Redevelopment of the Port of Ramsgate could by the key to our future success and prosperity as a town.

One thing is absolutely certain. The environment and ecology must be properly protected. However we need to recognise that the Port probably has little future in terms of operating a ferry service. In many other places ports have received multi million pounds worth of investment. Ramsgate cannot compete nor attract that level of investment. So it’s time to look at innovative ideas, which will also boost Ramsgate as a whole. We also need to ensure that any regeneration creates the secure well-paid employment that Ramsgate desperately needs.

We have the potential for a huge and amazing community amenity. There are many ideas for the port, some may involve building homes on the land, but we could and probably should retain our unique Maritime Heritage. Boat building and repair would be amazing local business which could provide training and apprenticeship opportunities. It would be wonderful if we could create opportunities across the leisure, travel, and sports sector meaning that people could come to Ramsgate to obtain qualifications and skills. We know that the tourism and travel sector have been hit very hard by Covid, we still need to think about how life can be when we start return to normal and to be optimist and ambitious.

Ramsgate and surrounding areas attract a huge amount of tourism and this could be further developed if we enhanced our offer for tourists, especially in the shoulder season. I picture how part of the area could be a wonderful vibrant food market, how we could have craft stalls, promote art, a music venue, and how we could have start-up units or designer makers co-located. Not to mention cafés, bars and restaurants. I’m sure within our community there is a wealth of great ideas which we could explore!

In any plan It would be important for general economic prosperity, to link the south and east of the port and the port itself to the rest of Ramsgate. I want to see the port used as an both an amenity for the people of Ramsgate but also a trigger for improved economic growth and resilience.

It’s our Port. Let’s make sure it stays that way!