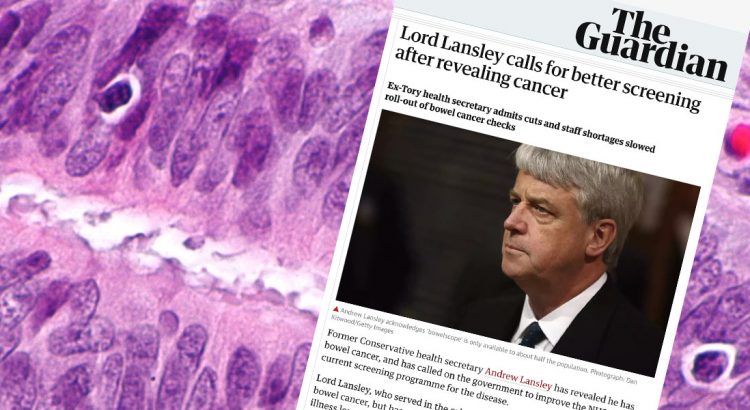 Former Tory Health Secretary, Andrew Lansley has admitted his bowel cancer could have been caught earlier if his own recommendations to his Government had been followed.

Early diagnosis is key to stopping this cancer and others. That effectively means early access to screening. Currently Thanet has amongst the worst bowel cancer outcomes and more needs to be done to improve the health prospects for our community.

As NHS budgets atrophy, and attention is diverted by yet more unnecessary reorganisation, this particular issue needs urgent focus. In my own family bowel cancer has cruelly curtailed the life of several of my younger cousins, susceptible because they had Lynch Syndrome. This topic is close to my heart.

Lynch syndrome is a genetic disorder which increases risk of bowel and other cancers. Macmillan say “Lynch syndrome (LS) is a condition that can run in families. LS is also known as hereditary non-polyposis colorectal cancer (HNPCC). It is caused by an alteration in a gene called a mismatch repair gene.

LS doesn’t cause any symptoms. But people with LS have an increased risk of developing bowel cancer, womb cancer and some other cancers. If your family has a history of developing these cancers when they are under 50 years old, it is possible they have the altered gene that causes LS.”

LS is a little known disorder but charities like Lynch Syndrome UK are raising awareness and offering support to families affected by it. In the meantime, Andrew Lansley’s Government needs to listen to the experts and do all they can to increase access to early screening.

You can find out more about Lynch Syndrome here.