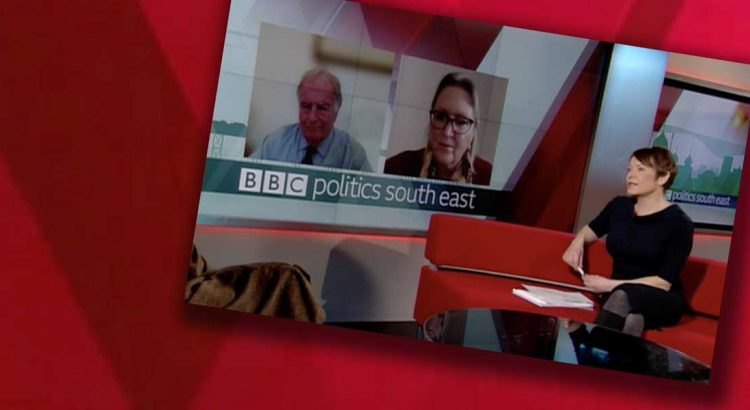 On Sunday 23rd January I was a guest on BBC Politics South East. Presenter, Julia George invited political perspective on the week’s news from myself as Deputy Labour Leader at Kent County Council and from Sir Roger Gale, MP for North Thanet. You can see edited highlights at the bottom of this page.

In recent weeks it’s been bombshell after bombshell from within the Tory party. First we’ve had ‘party gate’, then accusations of the worst sort of pork barrel politics, with whips insisting MPs vote with the government in order to secure funding for their constituencies. And the latest blow, Nusrat Ghani MP claiming her party is anti-Muslim. With a prime minister that has previously compared Muslim women to letterboxes, I can only hope that a full independent investigation on Islamophobia in the Tory party, long overdue, now takes place.

We await the findings of the Sue Grey report, but not withstanding that, it’s clear that Boris needs to step aside. We need good government and strong leadership at the moment, and we are so far from that. All of the infighting amongst the Tories, the threats and abuse, in the middle of the Covid crisis, on top of the cost of living crisis, alongside side the damaging impact of Brexit. Not to mention our need to play a positive role on the world stage.

You won’t be surprised to hear me say that the Tories are tin-eared, over privileged and out of touch with the electorate. I honestly think this is the worst government I’ve ever seen in my lifetime, what do you think?

The workforce crisis in both our hospitals and care system existed long before Covid. In fact it was made worse by Brexit. However you voted on Britain leaving the EU, you’ll agree one result of it has been the impact on our workforce, leaving the UK short of valuable workers in care areas.

We now have a crisis in our hospitals and in our care system. We have people in hospital who really need to be discharged in order to better recuperate at home. There are people stuck at home who require treatment in hospital. They can’t get into hospital because of bed blocking. The reason patients can’t be discharged is because there aren’t enough carers to look after them in their own homes. The Labour Party warned the government about this looming situation.

As I outlined in the BBC discussion, Labour would form a national care service, we would fix the workforce, invest in workers and above all we would have ambition to make caring a first-rate job so that more people would consider it a good career option. We’d end poverty pay.

Back in the 90s, when I was an officer in the Midlands for the GMB, I looked after ‘refuse workers’ – bin men, and I know firsthand what a tough job they do. It’s no surprise to see that collective action, workers coming together to demand better conditions and better pay, is working. Indeed the GMB have secured a whooping increase, taking the wage rate to £13.50 an hour. Well done! Let’s end the race to the bottom. It seems likely these disputes will spread. In Adur and Worthing the recent consultative ballot has yielded 92% ‘yes’ vote to further strike action. The GMB have requested management to get back around the table to negotiate.