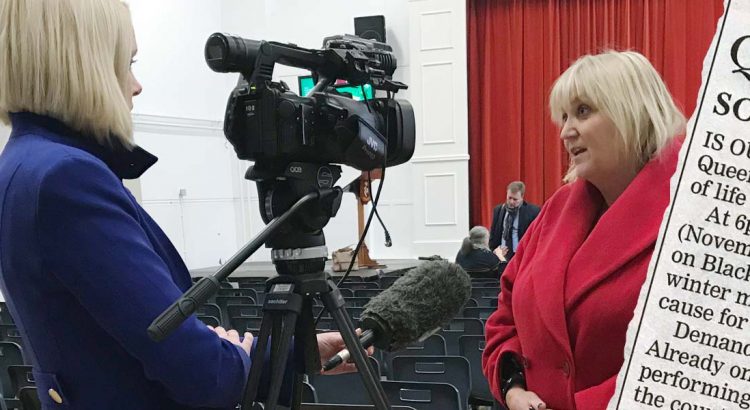 It’s that festive time of the year again, how quickly it seems to come around. It’s been such a busy 12 months, with so much going on.

Since being elected to Kent County Council in May, I’ve been able to spend all my time on ‘local’ politics. You might be aware that Labour is on an ‘election footing’. It does seem likely that another General Election could be called with a moment’s notice. We need to keep campaigning and be ready to take action to return a Labour Government.

Thanet is in the grip of poverty with our housing crisis, the homelessness issue, social mobility and threats to the level of services at QEQM. Add to this, closure of GP surgeries and dental practices and the loss of subsidised bus services are all real cause for concern.

Yet it’s also true that our community spirit is strong and we can forge a way forward together. We can do better than this. I have outlined some solutions in my bi-weekly column for the Isle of Thanet News.

I was really please to be invited by a local charity, CXK to be a ‘Dragon’ to judge teens taking part in the National Citizen Service (NCS)in Broadstairs. The 15-17 year olds were pitching ideas for their community projects as part of the social action phase of the youth empowerment programme.

Along with the other dragons in the den, I was able to offer valuable advice and guidance to help shape their social action endeavours.

We were all impressed by the participants’ ideas and plans, but I especially noted their commitment, public speaking and team spirit.

In the press on Sexual harassment 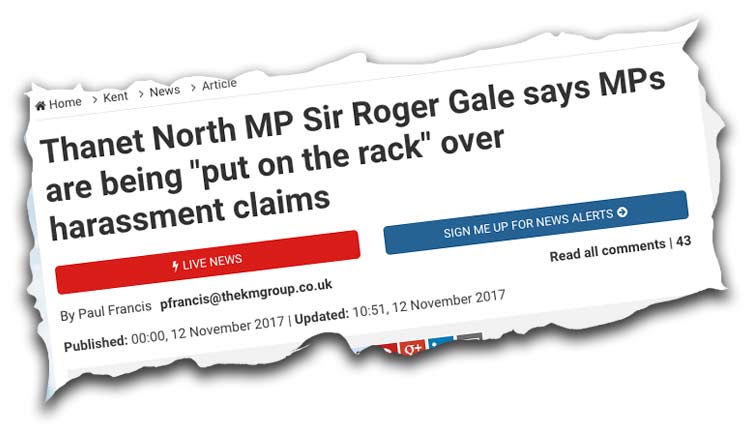 In the press last month, my short response to questions put to me regarding Roger Gale MP’s statement that female journalists bear responsibility for the wave of harassment allegations made against MPs. This serves to show how out of touch he, and MPs like him really are. Parliament should be, and must be, a place of exemplary conduct. Many politicians do adhere to this. There is no place in our modern democracy for such sexism and misogyny. Nor racism and homophobia. The time is right to raise the bar.

I was asked for my ‘two pennies’ worth on BBC Radio Kent on the Government’s threat to take over Thanet’s Local Plan. I’d say it was a difficult interview as it’s such a complex issue to cover in so little time.

The Secretary of State for Communities and Local Government, Sajid Javid has written to Thanet District Council leader Chris Wells. Threatening to ‘take over’ our Local Plan. We are one of about 15 councils in England that have failed to put a plan into place. This means, Sajid will intervene, sending in Government staff to sort this out for us.

I’m not sure everyone is aware of the scale of our housing problem, but in Thanet we have around 1000 households in temporary accommodation, 300 in bed (not bed & breakfast) and 48 rough sleeps (which isn’t the whole figure), approximately 2,500 on the housing list and only 69 of those have been housed in the last six months.

We have demand that we simply can’t meet. We have a crisis.

I’ve suggested that the issue of Manston is holding up the Local Plan. That we have a ‘robust’ offer from Stone Hill Park who are ready to break ground. That would mean at least some jobs, some section 106 funds and some CIL monies released into our local economy. These are discussions we should be having as a matter of urgency, negotiating with the developers for the best and most equitable outcome for all of us. We should be making certain we have affordable and social housing sealed into planning permission.

Anyway, there it is. Apart from the fact that everyone needs and deserves a home, the continual uncertainty and frankly wishful thinking for a DCO on Manston, for a Cargo Hub, may in fact mean the Government do step in and take control.

Where to we go from here? I will be discussing this with my Labour Councillor colleagues. Iris Johnston has repeatedly called over the last two years for a housing enquiry day to scrutinise these matters carefully. Labour Group Leader, Jenny Matterface has repeatedly warned this situation needs addressing. All Labour councillors are trying to support people with severe housing need.

The Local Plan is due to be voted on 18th January 2018. Lobby your local councillors to avoid a housing plan being imposed. Ask your local Councillor where they stand! Remember – they work for you and should represent your community’s interest.

Other coverage of Thanet District Council’s failure to agree the Local Plan appeared in KentOnline.

Local Labour Party activist, Mark Nottingham and Labour member, Edward Lucas who works at Ramsgate Football Club organised a food bank collection ahead of their fixture against Lewes (which Ramsgate won 2-0). I was delighted to be able to join them where a good collection was made. Several of those local fans donating made the same observation “we shouldn’t need foodbanks”.  I have to say I wholeheartedly agree, but whilst ever we do, it’s important to support those in need.

Nothing is more important than our NHS. We all rely on those services. We held a lively public meeting with CHEK (Concern for Health in East Kent) at Chatham House Grammar school on 9th December. It was very well attended, with many in the audience able to ask questions of service managers and professionals about plans to rationalise hospital services in Ashford, Canterbury and Thanet.

I spoke, tackling the workforce issue and our need to train from within our community, attract skills from outside and retain the talent we already have by providing the pay and benefits that our NHS staff deserve.

The meeting was covered by the BBC.

I also had a letter in the Thanet Gazette on 1st December.

Also in the news

The Isle of Thanet News covered the alarming stories I had been hearing of ‘near misses’ at QEQM Hospital in Margate. 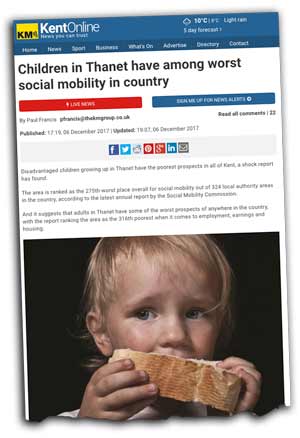 Paul Francis in Kent Online covered the release of The Social Mobility Commission’s latest annual report which ranks Thanet as the 275th worst place out of 324 local authority areas. Disadvantaged children growing up on our isle have the poorest prospects in all of Kent according to the report. This is something I am passionate about changing for the better.

You can read the full story at Kent Online.

Finally, I’d like to wish everyone a very happy and peaceful Christmas and I look forward to continuing to work with you and for you in 2018.