Thanet’s Labour Party continues to voice opinion in our community. Here are just a few of the news stories where I have championed a socialist perspective during February.

We have had news crews a plenty here in Ramsgate to cover Chris Grayling’s shambolic planning for a no-deal Brexit. The Transport Secretary thought he’d secured the services of Seaborne Freight to operate a ferry service between The Port of Ramsgate and Ostend in Belgium, but the company has no ships, no experience, no deal with Ostend and no chance of operating from Ramsgate if the port is unfit for use.

On that last point, Thanet District Council has been pumping money into the abandoned port to keep it ‘ship ready’, but this has been at the expense of other essential services. With a budget due to be set at Council on February 7, the question was would the Conservative controlled administration cut funding to the port at a time when Theresa May and co might need it most?

Here are two BBC News reports from before and after the Council meeting and a piece I did on BBC Radio Kent the following Monday.

The free paper, Thanet Extra covered the story too. Click on the image for a larger version. 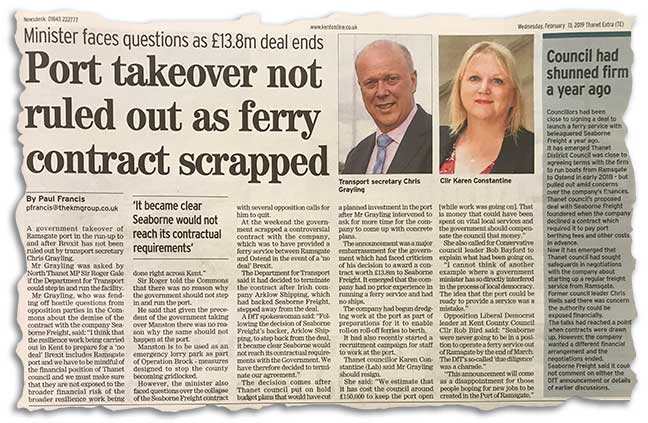 There’s more to Ramsgate than an abandoned port

On 12th February, whilst driving to County Hall in Maidstone, I was listening to Julia George’s phone in on BBC Radio Kent. The topic was the future of Ramsgate Port and the controversy surrounding Transport Secretary, Chris Grayling’s Brexit plans, which were rapidly unravelling. Feeling the need to paint a positive picture of our town, I pulled into a lay-by and called the programme…