This month has started well, with Labour gaining 15 additional seats on Thanet District Council. My own ward, Newington was the first to be declared, with myself and Rick Everitt elected to serve.

Strong results in Thanet for Labour

The Isle of Thanet News were at the count and you can see their Thanet District Council election results coverage here. 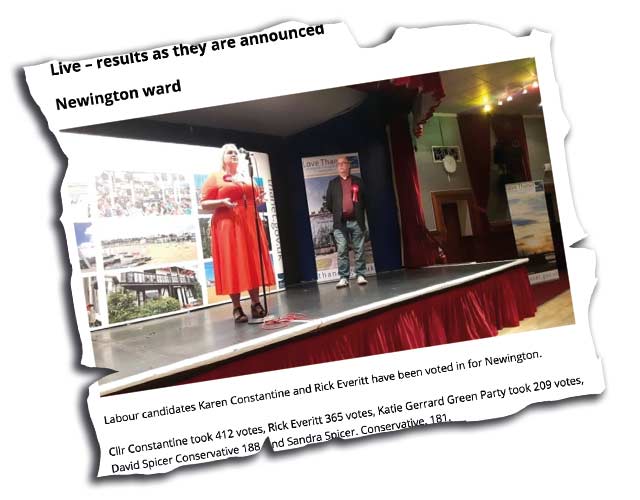 Additional reporting was run by the Thanet Extra team at Kent Online. 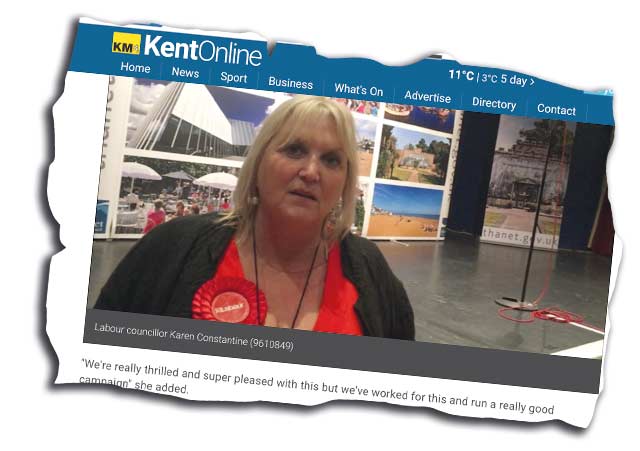 Locally, Labour has done well. We have won Ramsgate Town Council which is a huge change for the better. Although we have not gained control of Thanet District Council, our numbers swelled fourfold with a fresh intake of councillors. People have turned back to our party, dissatisfied with the track record of The Conservatives and UKIP before them. Labour councillors (and now we are 20) will continue to hold the Conservatives to account and fight the decisions that negatively affect residents and businesses on our isle.

For all the results, here is a link to the official election pages on Thanet District Council’s website.

On 5th May I was a guest in the studio at BBC South East in Tunbridge Wells for the weekly political roundup. Also in the studio was Helen Grant, Conservative MP for Maidstone & The Weald. Presenting was Julia George and we covered topics including the May 2nd results, coastal footpaths and the new political party, change UK. Nigel Farage also made an appearance and, although we had been told we would get to respond to whatever he came out with, that opportunity never came.

Below are edited highlights from the 30 minute programme. The full recording can be seen here.

The problem of antisocial behaviour in and around the harbour area of Ramsgate will not go away. The disturbing news of a stabbing on Harbour Street adds weight to calls for more to be done to curb the effects of the drinking culture.

In this piece by Kathy Bailes numerous voices express concern. She also reports on the forthcoming  meeting I am arranging between local businesses and the Police. This will be one of a series of meetings I have held to foster dialogue in the community and look for ways in which the violence and vandalism can be eradicated. The proposed date for the meeting is Wednesday 22nd May at 6pm. Please contact me for venue details.

Read the full story in Isle of Thanet News

As mentioned above, businesses and residents in and around Ramsgate Town Centre have long been concerned about the rise in antisocial behaviour in the area. I have now taken to organising meetings for these parties to discuss the issues and suggest solutions, which can then be taken to the relevant authorities.

At the meeting held at Café Zest on May 29 there was a very good turn out and attendance by Thanet Chief Inspector Lara Connor who outlined changes Kent Police would be making to improve the area.

Read the full story in Isle of Thanet News

Over half the children in Newington are living in poverty

Thanet is again topping the tables for child poverty in Kent. Despite a 4% drop since the results a year ago, 35% of children are living in poverty in our area. My own ward, Newington is listed as having 51% of children living below the breadline.

In this day and age in such a rich nation, this is an absolute outrage. 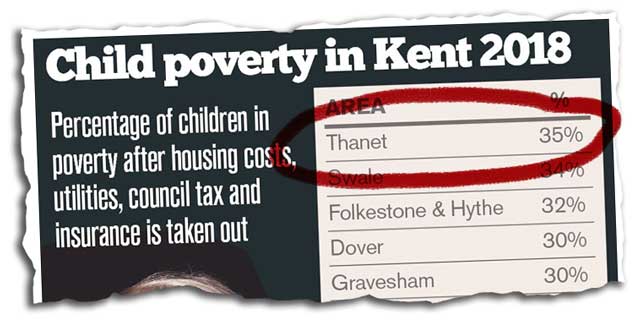 The figures, reported on KentLive show that poor wages and high cost of housing are factors driving poverty. In their article I provide the view as a Newington Councillor, saying it’s a postcode lottery, with kids being born into poverty and escape being tremendously difficult no matter what their talent or ability.

Read the full story on KentLive.