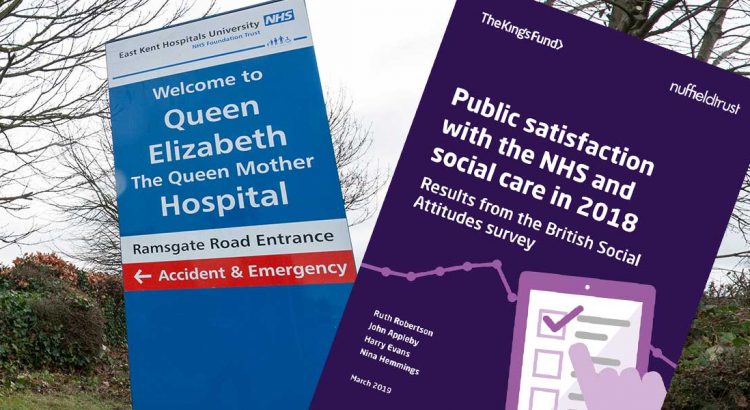 A damning NHS satisfaction report has been published this month by The Kings Fund and Nuffield Trust. The public and those that work in the organisation are feeling the least satisfied in many years.

I was interviewed by Ian Collins on BBC Radio Kent about this latest shocking report. Joining me as a guest on the programme was Craig Mackinlay, Conservative MP for South Thanet, who admitted GP services in our constituency are probably delivering worse than average NHS satisfaction to patients.

NHS satisfaction low for staff too

Whilst the public scored the NHS poorly, so too did the staff that work in the service.

Contrast this with Emergency admissions which are up by 10%, ambulance calls are up by 15% and medical tests are up by 19%.

The NHS workforce has only grown by 6%, nowhere near enough to meet existing need. No wonder more than half our staff are working unpaid overtime routinely. As Brexit looms large it’s worth remembering that 13% of staff are not from the UK.

What of Government plans?

In the new Long Term Plan (LTP) the Government has earmarked £20billion for the NHS over the next 10 years. However, at best this will deliver a ‘standstill’ — no improvements.

Worryingly, the LTP is silent on Health and Social Care. Currently there are 2,500 hospital beds occupied by people who could be better looked after in the community. The plan does not address the ‘mission critical’ issues of workforce.

Why are we turning away people who actively want to be trained as clinicians? 10,000 people applying to be Doctors and 20,000 applying to be nurses were turned away.

So we are creating the the conditions which will prevent new staff from entering the NHS as a career choice, creating a high pressure work environment, on top of the ‘usually high’ pressures in these types of dynamics and demanding roles. We aren’t doing anywhere enough to stem the flow of those trained competent and, now it seems, irreplaceable staff.

Current levels of NHS satisfaction are an indicator of the serious of disregard for the Service by the current government. I believe that our MP choosing to highlight NHS fax machine use during the interview is indicative of his refusal to admit the calamity that is occurring.