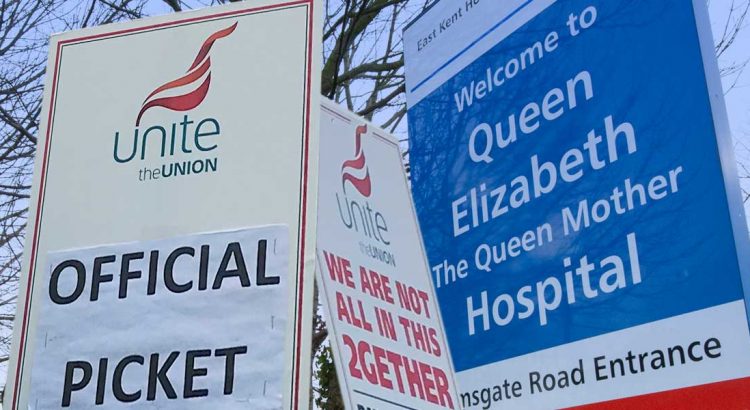 NHS estates staff at Margate’s QEQM Hospital have completed five days of industrial action over plans to transfer their jobs to a new subsidiary.

Such a strike by NHS staff is a rarity. Picket lines were in place for five days from September 24 in Margate and Kent and Canterbury Hospital, plus William Harvey in Ashford.  The 42 employees who took action say their future looks bleak and that they feel let down.

The fact that our local NHS trust is pushing ahead with 2together Support Solutions flies in the face of the most recent NHSI advice, which is basically “Stop”. The national regulator, NHS Improvement has told NHS trusts to “pause” any ongoing plans to set up subsidiary companies and wait for new guidance to be issued.

The transfer of the NHS staff is both a complex and dubious process. It does a number of things. It allows the trust to start to employ new staff on a lower salary, with less secure terms and conditions. This means more low paid zero hour jobs in our local labour market and it means the employer can benefit from the 20% VAT exemption, a loophole that will hopefully be closed.

For five days those employees at QEQM and the other hospitals in Kent forwent their pay to take legitimate industrial action. They were taking a stand for all of us. They were part of the fight to stop the erosion of our National Health Service – currently falling piece by piece into private hands, driven by regulation designed to benefit commerce rather than the public.

This week there have been perturbing reports of operations at QEQM being cancelled due to problems with operating theatres. I’ve been told of smoke in operation theatres. If true, I can imagine the frustration for staff and patients alike. It’s no way to run a public health service. While trust managers look for schemes that will slash costs, the inconvenience and misery of Thanet residents requiring treatment just gets worse.

We deserve to be valued

The maintenance team that withdrew their labour are every bit as essential to the smooth running of the hospital as doctors, nurses, reception staff and managers. Without this whole team of NHS staff, all working together, nothing works.

Ken Thomas one of the men on strike explained to me, “I’m doing this to save jobs for the future, to fight for a pension, paid holidays, sick pay. My wife is a senior carer, she supports me because she knows at my time of life, although I have the right experience, starting off with a new company could mean losing all the benefits. She also supports me because we both believe in the NHS.”

I also spoke with Rodney Goldfinch, also part of the picket line and on strike, and asked him why he was taking strike action. He explains, “I’m sick of being kicked. Managers seem unconcerned. Everyone in the team does their best but we feel very undervalued. Doctors and nurses are always in the limelight. We supported them. But we have the hospital to run. We have a 150 toilets to keep running, macerators on every ward, thousands of taps, legionella duties, hundreds of showers, the car parks and the NHS accommodation block. We do it all, we take on extra, we chip in to help out. It’s time we were valued.”

Action beyond the picket line

As a Kent County Councillor, I’m concerned to hear of our NHS Trust not heeding the call for a pause in setting up tax avoidance subsidiaries. I will be raising this with those who have responsibilities or interests. I have already written to Craig Mackinlay MP and Paul Carter, Leader of Kent County Council. Whilst attending the Labour Party Conference, I had a meeting with the Jon Ashworth MP, Shadow Secretary of State for Health and Social Care and discussed, not only the plight of the NHS staff, but the landscape in which their need for industrial action was necessary.

The truth is that, whilst we have a Government hell bent on profiteering at the expense of public health, we need always be fighting, striking, demonstrating or simply voicing our objection. Do nothing and we lose our NHS. Doing nothing is not an option.