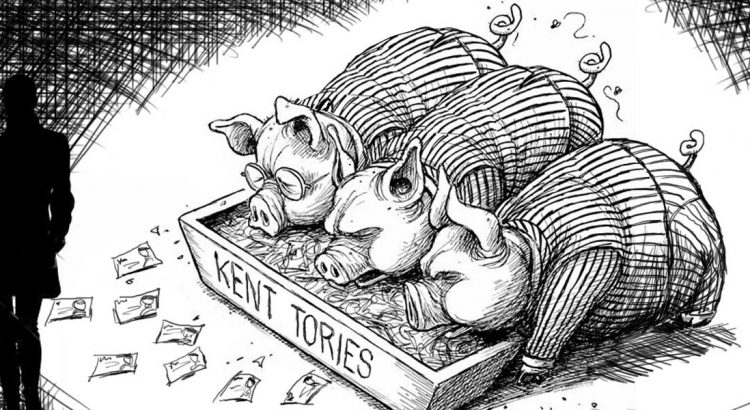 I was astonished today when Conservative Kent County Councillors voted to award themselves a whopping 15% pay increase. Yes that’s right, it’s not a typo – an eye watering fifteen percent.

The independent pay review board had recommended a 1.5% award to councillors at County Hall. This was based on evidence, comparisons, and interviews with councillors. Of course, commissioning this review would have cost tax payers’ money, but even though it’s independent and has a price tag, it appears easy enough to disregard.

The motion for a 15% increase in councillors’ allowances was put to the floor. A number of points were raised including the fact that the councillors hadn’t had a ‘rise’ since 2009.

As a newly elected Labour councillor, I had the opportunity to ask my first question in the KCC chamber today. It was designed specifically to wrinkle out what was happening to street lights in Thanet. Why are 3000 lights off? I wanted to know that proper consideration been given to safety on our unlit streets. Especially after the savage serious sexual assault that took place against my own daughter. Apparently the cost of retro fitting the concrete post style lamps was not fully factored in and there is now no money.

Isn’t it simply adding insult to injury when those Tory councillors whose own party policies put crippling austerity measures in place then award themselves a staggeringly high award with no factual justification?

Other members then claimed that this ‘hike’ would encourage much needed diversity in the Chamber. But lacked any evidence of ‘how’ this would produce that outcome. It sounded like a poor attempt at justifying their greed!

As I said in my response, if this is an equality measure then let’s look at it properly, set stretching and timely targets, commission and use best research and fully resource the ambition to create a more diverse chamber.

On reflection I wonder whether the Conservative leader of the council, Paul Carter spied an opportunity to slip this in, just before the summer recess and with so few Labour councillors to resist. The Labour group are down from 13 experienced and long serving councillors to 5 absolutely new starters, myself included. The timing is obviously planned, if you think that after the initial ‘rumpus’ it will all settle down in the autumn. No doubt this will pique the interest of other Tory controlled councils. More will follow, I’m sure.

I’ve no doubt that the public will see it as Conservative snouts in the tough! This undermines public conference in all of us as public servants. As I pointed out, the residents in my division, Ramsgate, one of poorer areas in the County, will be less than impressed.

All Labour councillors voted against this and spoke up against the rise. Sadly, we were accused of ‘virtue signalling’ and coming pre-prepared to run to the press. This wasn’t the case – we genuinely were shocked to see that this was ‘palatable’ to fellow Conservative members.

Will there be money for street lights in September? I certainly hope so! Otherwise I’m afraid my fellow councillors will be accused of advancing their own desires at the expense of public safety.

I will be accepting the award but using the additional money to fund local community campaigning and political campaigning that will see the Tories challenged robustly in Thanet.

Labour did not support this in any way.