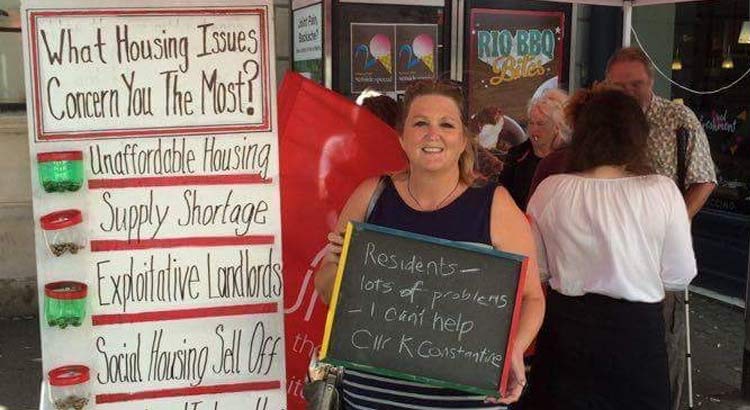 The south east has housing pain too

The Unite Community ‘Housing Crisis Roadshow’ reached the seaside town of Ramsgate yesterday, where local people said unaffordable house prices and a shortage of social housing has left them unable to find a secure home and the possibility of eviction and even homelessness looming over them.

Samantha, 26, is a single mother who was recently relocated from a hostel in Thurrock to a ‘mother and baby’ facility in Ramsgate. The council have now told her that she will need to live here for three years before she can apply for a council home for herself.

“My daughter is two years old and the council has moved us at least six times since she was born,” Samantha says.

“It’s horrible way to live. I have to share a bed with my daughter because there isn’t enough room for her to have her own in the place where we’re staying, and this isn’t going to get better for at least three more years.

“It’s encouraging to see Unite Community campaigning for us like this. I hope that it helps to give our government a wake-up call,” she says.

Samantha is not alone – other parents in Ramsgate are also feeling the pressure of the housing crisis.

Lucia, 45, is desperately concerned about what will happen when her 17-year-old son decides to move out and the bedroom tax is placed on her property.

“When I was my son’s age it was an exciting and wonderful thing for my family and I when I was ready to fly the nest and start my independent life,” Lucia says.

“So do I have to tell me son to never leave home? It seems in this country some people are seen as worth having a promising future, and others simply aren’t.”

The Roadshow took place on Ramsgate high street yesterday (August 22), where local people had the chance to talk to the Unite Community south east team about how the crisis is felt in their town, and vote on the issue most concerning them – in Ramsgate, unaffordable housing received the most votes.

Kelly Tomlinson, Unite’s south east community coordinator says that it is unsurprising this had the most votes, as house prices in the south east are in some places 20 times higher than the average wage.

“House prices are unaffordable for average families and renting is sky-rocketing,” Kelly said.

“There is a lack of affordable housing and local authorities are not building new council houses to provide the homes that are desperately needed.

“Unite wants to get the general public aware of the myriad issues relating to housing and encourage them to work with the union to campaign for homes for all.”

Married couple Phil and Christine live in housing association accommodation because the high cost of housing made home-ownership an impossibility.

“It would be great to have a place of our own,” Phil said.

“To walk through the front door and know that it’s ours, but the way things are, this just isn’t an option. I’ll keep playing the lottery and maybe one day we’ll be lucky.”

Karen Constantine (pictured), Labour councillor for Newington ward, also attended. She said, “We do not have enough housing here, so we’re seeing many people in dire need, living on a knife edge not knowing where they’re going to live. It breaks your heart to see hard-working families going through this.

“Anything we can do to unite communities and raise awareness of unmet needs in local populations is a good thing. It really concerns me that some people blame those who most need our sympathy and support.

“Different groups in society have got to come together to support each other through this crisis, because it affects everyone now.”

The month-long roadshow will reach Crawley on Wednesday (August 24) before continuing through the south east.