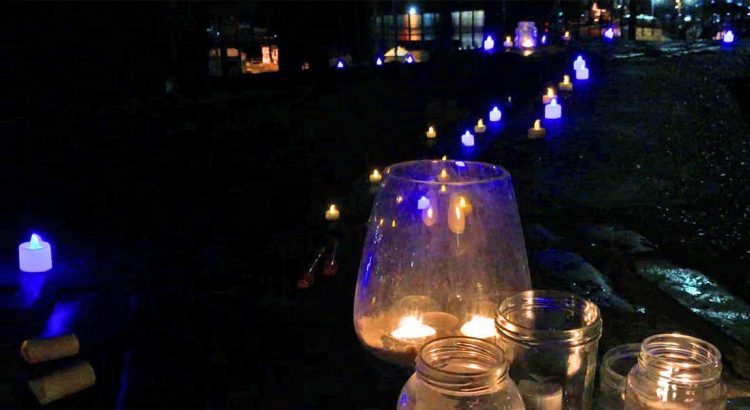 The emotions seen over this weekend are those of sadness, despair and anger. Whilst the vigil in Clapham for Sarah Everard made headlines for all the wrong reasons, here in Ramsgate a smaller affair passed peacefully and safely.

Keeping within COVID-19 rules, local women, myself included, organised a walk-by vigil for Sarah Everard. This not only paid respect to a woman who suffered at the hands of a stranger whilst walking home at night, but remembered all the other women attacked, raped and murdered on Britain’s streets.

The location, was at Ramsgate’s Tidal Ball Mast, the scene of a vicious sexual attack a few years ago.

Back then many of us were campaigning for Ramsgate’s street lights not to be turned off at night. After a sustained campaign we were successful. As a newly elected councillor at Kent County Council I was able to press for £2.3m funding. But illuminated or otherwise, our streets should not be a place of danger for anyone.

This weekend we have heard many people saying society must change. Men must change. People are calling for appropriate behaviour to be taught in school as part of a relevant sex education programme. Others call for changes in the law so that attackers no longer get lighter sentences than fly-tippers. And many want Police officers to change to recognise how women suffer and to take seriously their reports of stalking, intimidation and violence – threatened or real.

My hope is that society will change. With a female-friendly government, laws will change. Eventually, all youngsters will grow up knowing right from wrong and respecting each other. But that isn’t going to happen over night. We will have to continue to voice our concerns and demand change.

In Thanet, our community has to call for safer streets. We suffer more violence against women than elsewhere in Kent. We cannot wait for society to change. The welfare of girls and women has to be addressed now.

In the coming days I will be contacting the Police and Crime Commissioner, Matthew Scott. More than a hundred local people so far have co-signed the letter requesting a meeting. At that meeting I’m going to ask the hard questions and request a comprehensive safety review – through the eyes of women and girls.

I’m sure we all agree that women should be able to walk alone anywhere without fear. But as reports repeatedly show, this is simply not the case for the vast majority. Women do indeed ‘walk in fear’.

As we hear of a Met Police officer arrested on suspicion of murdering Sarah Everard, women have taken to social media to express their concerns and experiences. YouGov polling shows that 97% of women between 18 to 24 have been sexually harassed, while 80% of women in all age groups reported having experienced sexual harassment in a public place. Isn’t that shocking? Many groups across Kent are holding ‘reclaim the night events’, POW, Power of Women has organised one (observing Covid regulations) this Saturday from 6pm on Margate main sands.

I was outraged by the Thanet rape and sexual assault statistics a few years ago. I wrote to and met with our local MP following a series of rapes and sexual assaults across Thanet. Our crime rates then were worryingly high compared to the rest of Kent, and they remain of huge concern.

Reductions in these hideous crimes are occurring in other parts of Kent but Thanet isn’t seeing a similar decline. Our sex crime rates remain stubbornly high.

Back in 2016 I raised the issue that there were 67 rapes or sexual assault charges in Thanet where there were no arrests made at all, let alone charges or convictions.

Since then the number of rapes and sexual assaults in Thanet remains high.

It can be hard to drill down into the detail but in 2019 / 2020, (the latest figures) there were 85 sexual offences without consent, including statutory rape, which is a slight decrease on the year before 2018/2019.

However the Thanet figure is the highest rate for this type of crime in Kent. Only reducing by 7.3% when the average reduction across Kent is 17.3%. Even larger reductions have been achieved in some parts of the county. Tonbridge and Malling for example has seen a much welcome reduction of 49.1%. Tunbridge Wells and Sevenoaks have seen reductions of 38.2% and 39% respectively.

Why is Thanet an outlier in Kent, with the highest number of sexual offences, including statutory rape committed here, and why is the reduction in these crimes so low compared to the rest of Kent?

Thanet has also seen 271 Sexual Offences /Violence against a person offences that are sexual in nature including rape, under age sex and sexual grooming. Again this compares badly with the rest of the county. Across Kent this figure has dropped by 7.7% whilst in Thanet this crime has risen by 7.5%.

Right across Kent we have seen sex crimes reducing but the Thanet figures remain extremely worrying.

Nationally we have also seen a 23% drop in the prosecution rate of rape. This is the wrong direction of travel. I’d like to meet with you (online) as a matter of urgency to review these statistics and to ensure a levelling up approach is urgently put into place.